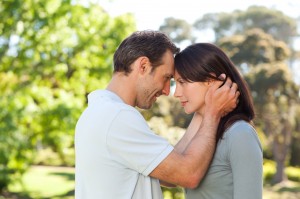 Tim and Eva, married for a long time, both in demanding jobs, two – in the meantime – grown-up children. Our position in life was very good, a nice house, each one with their own car, nice holidays several times a year, a large circle of friends, a good income – and yet unhappy? Life rushed by, the deadlines – even on weekends and holidays – were tight, there was less and less time for us and we didn’t cherish it.

And all the while this unpleasant mountain in one’s heart became louder and louder to the point where it could no longer be ignored. Physical love had not taken place for years. Now there were separate bedrooms and an important part of our relationship had fallen by the wayside.

The situation came to a head, the daily arguments increased and love turned over time into hatred. Insults and accusations were commonplace. A solution had to be found. The only thing that remained was to separate. Deep down, we both felt that it wasn’t the right solution. But, at that time, there didn’t seem to be any other path for us.

We parted in friendship and kept distance between us. Each one looked for different living surroundings and tried to cope alone. After forty years of marriage, it was a very unusual situation. But each one had to get over it on their own.
The months passed and each of us had set ourselves up on our own. And then one day there it was – the feeling that something very valuable had been lost. We agreed to meet up and see one another over the weekend, i.e. to spend a night together. This “real” reunion also included physical love. The desire was there for both of us. But there was the problem that it no longer “worked.” The long abstinence, the problems of menopause, the long silence of feelings and fantasies.

A visit to the doctor produced a large bag of hormone remedies which didn’t appear to us to be a solution. We decided on a helpful approach – without harmful side effects. An e-mail to Karin Haemmerle with a description of our problems and photos of the two of us was the beginning of a distance program with her. Within a short time the physical problems were resolved. Many nice tips from Karin led to a very nice, new sex life.

The long absent intimacy was there again and we enjoy it now as if it were a precious treasure. The joy we take in our sex life is still beautiful and intense now, even after 2 years, even more beautiful than before, since we can now deal with it in such a wonderfully relaxed way.

A large part of that is thanks to Karin and we very often think about that in gratitude and joy.

If reading our report resonates with you and you are plagued by the same issues, do not hesitate to contact Karin, she will also be able to help you – with love and understanding – to enjoy life again.