One of the big problems was my stomach. For the past few years, my stomach will be bloated at different times of the day. I would lie down on my bed at night and it looked like I was 7 months pregnant. It would be aching, and I had a pain in the top part of my stomach which would get worse as I turned from side to side, and then onto my back again. It would hurt for several hours, which turned into days, then weeks, and then after about 6 weeks, it would slowly disappear. Three or four months later it would be back, with the same intensity as before.

I went to my doctor and he put me through a series of tests, and the results were that I had bacteria in my stomach called Helicobacter pylori (H-pylori). This bacterium is a spiral shaped critter with long tentacles that burrows into the lining of the stomach and produces its own enzymes to protect itself from the stomach acids. It causes two different kinds of ulcers – peptic and duodenum and is also linked to stomach cancer.

The doctors informed me the only way to treat this bacterium was to go on an aggressive course of antibiotics, using three different antibiotics for six weeks, and then take another medicine to get rid of the yeast infection that it would cause. And, there was no guarantee the bacteria would be gone as there is only a 30% success rate. I wasn’t too interested in going through all this.

The next time the symptoms became unbearable, I called Karin and told her about this excruciating pain and bloating and the bacteria, and she guided me through several exercises, and I was amazed that after 20 minutes of her help, the bloating and the pain disappeared completely. The next time it happened, it only took about 6 or 7 minutes, and now it has not happened in weeks! I am extremely grateful for Karin’s program and her expertise.

Jan Matthews, 55 years old is from Alberta, has made wonderful life changes. Recently riding her bike over 100 km in a marathon on June 25, 2011 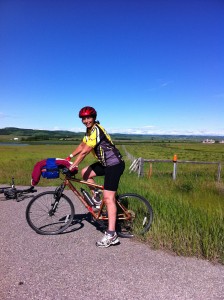