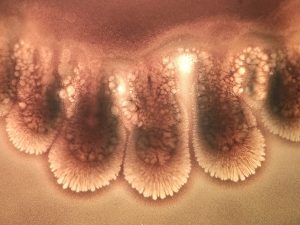 Karin will help you overcome and dissolve Candida Albicans overgrowth and candidiasis.

A consistent diet is also necessary in depriving Candida of its nutritional basis. Sugar, sweets, white flour products, gluten, alcohol and sweet fruits need to be strictly avoided. In systemic candida infections the gastrointestinal system is overgrown by the fungus and fungal anatomy and physics can change and even mutate turning yeast organisms into a troublesome mycelial form that causes disease. When this happens, root/tentacle structures are formed by the fungus that allow the new harmful fungus to penetrate the mucosa/membrane wall of the gut and continue on into the blood stream. From there the fungi gains easy access to all other parts of the body as well as organs, the lymphatic system, and all body tissues. Systemic fungal infection has now become a reality and the condition is very serious, even life threatening. As the fungus spreads its roots throughout the body, it weakens the immune system, slowly sucking the life out of its host.

Once the candida fungus becomes dominant in the body, the immune system is put under enormous stain, to the point of overload, so that candida sufferers become susceptible to a variety of different infections, viruses, and also allergies to certain foods, house dust, animal dander, fragrances and so on. Even sufferers who have never experienced allergic reactions before, may suddenly experience a variety of allergic reactions due to having a system fungal infection that weakens their immune system.

Absorption of essential nutrients is significantly reduced as large parts of the intestine become overgrown with Candida fungi. Candida sufferers are therefore at high risk of developing deficiencies in nutrients such as the B vitamins, vitamin D, iodine, calcium and magnesium, as well as other vitamins and minerals, which in turn can cause various deficiency diseases.

Unfortunately for many Candida sufferers, the situation is that they have been living with the disease for years without even knowing that their disease has its cause in an imbalance in the intestines and is indeed a fungal infection. Many people have accepted the physical symptoms as normal living conditions, becoming accustomed to living with various symptoms as fatigue, headaches, recurrent colds, recurrent earaches, eye irritations, allergies, urinary tract infections, and so on.

Following is a more detailed description of the many symptoms:

You are unable to concentrate, your memory deteriorates, you experience a “fog in the head”, are irritable and quick to anger, experience dizziness, poor coordination, depression and panic attacks, are tearful, extremely tired, hyperactive and have a severely limited libido, with simultaneous cravings for sweets that are hard to satisfy.

Acne, cysts, hives, psoriasis, eczema, dermatitis, fungal infections in the nails and on the skin, dry brownish patches and dermatophytosis, jaundice  (due to overloaded liver) and an unpleasant body odor, starting from the feet, palms and forearms.

In some cases, the roots of the fungus can be seen on the surface of the skin with the naked eye, including on the feet. Once the roots start growing in the intestine, they can spread to the legs, for example and when they reach the feet, they cannot grow any further. In this case, the roots may be seen as small pale yellow/red spots, which after some time change to small puncture brown/dark sores as the roots retract once the fungus is again under control.

Some people with severe systemic fungal infection have a very characteristic odor of fungus in the sweat on the palms and forearms, especially during die-off, when toxins are also secreted.

Those who have root-forming fungus in their mouths may also have white coatings on their tongues, which is caused by untreated Candida fungus, especially when a lot of sugar or allergenic products are eaten. When the anti-candida diet is started, the white coatings on the tongue and gums usually disappear. However this does not mean that the root forming fungus is gone. In some cases the fungus may appear as a kind of depression along

the cheeks. These depressions become narrower by degrees as the fungus is starved out and healing occurs. As the fungus completely withdraws from the mouth, a fine, dense network of small puncture would will appear in these depressions. These small wounds are the holes where the fungal roots were previously lodged and fed from the carbohydrates in the food. This dense, interconnected network of fungal roots occurs in a systemic, roof-forming fungal infection and occurs all the way through the digestive tract, anywhere the fungus can pull sugar from food. This network is densest in the intestines, where our food is completely or partially broken down, because that is where sugar from food is most easily accessible. Also, in the intestines there is usually always some food the fungus to grow on, unlike the mouth or anus, etc.

This is the strength of a root-forming Candida infection; a large, dense, interconnected network of fungal roots in the digestive system and from there onto (in some circumstances) all part of the body.

The fungus is also often found in the mucous membrane of the eyes. The result is photosensitivity (especially to sunlight), eye pain, itchy eyes, dry eyes, bloodshot eyes and eye infections.

In the ear, fungus can manifest as ringing in the ears and ear infections.

Frequent colds and flu, allergies, sensitivities to foods, fragrances and chemicals. Allergies that first appeared in adulthood, herpes sores, warts, celiac disease, psoriasis, etc. In stage 3 of systemic fungal infection, other localized types of fungal infections often appear, such a skin fungus, nail, fungus, fungus on the scalp, etc. These fungal infections can otherwise be suppressed by the immune systems under normal circumstances.

Some people have only a few of these symptoms, but still suffer severely from the disease, because it varies greatly from person to person on how sensitive one is to the spread of the fungus, the stress of the toxins on the body, etc. In some people the fungus never appears in the mouth or on the skin but only in the stomach and intestines. Then it depends mainly on the severity of the spread in the stomach and intestines on how sick you feel. It can be more difficult to diagnose the disease if there are no visual symptoms, but this does not mean that the person would suffer less because of it. This depends entirely on the individual’s sensitivity to the fungus and its toxins.

Karin will help you overcome Candida albicans overgrowth and candidiasis with physical applications and dissolve it through frequencies.